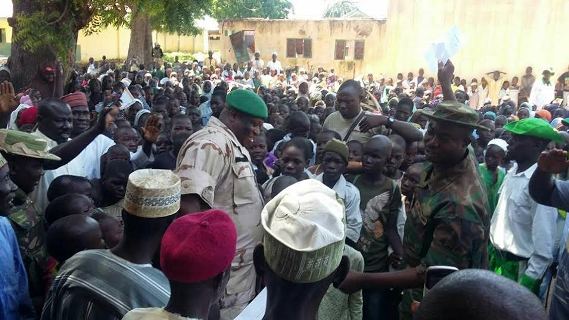 The military has reopened schools in the former Boko Haram enclave of Gwoza, Borno State.

The Acting Director, Army Public Relations, Sani Usman, in a statement on Friday, said that the military and other security agencies had put adequate measures in place to protect the reopened primary schools.

He said the decision by the military to reopen the schools was to help the returning internally displaced persons and their children.

Usman, a colonel of the Nigerian Army, also said that the troops rescued 23 men, 33 women and 34 children during a rescue operation at Adisa and Balazala villages in Gwoza Local Government Area of the state.

He stated that the troops also captured a large number of fleeing insurgents disguised as IDPs at Dara Jamel near Banki, border town with Cameroun.

According to him, the troops had commenced interrogation of the intercepted persons with a view to ascertaining their identities.

He said, “To further assist returnees and other IDPs with education of their children, the military on Friday reopened a mixed Primary School in Gwoza, Gwoza Local Government Area of Borno State.

“The military, in conjunction with other security agencies, has put adequate security measures in place to ensure the pupils and teachers’ safety. Already, classes have commenced and the turnout was quite impressive”.