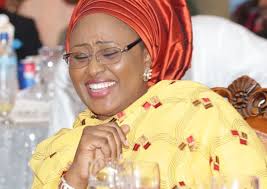 Due to the growing number of reported rape cases in the country, wife of the president, Mrs. Aisha Muhammadu Buhari on Monday advocated for the enforcement of the law on rape passed this year on May 25 (Prohibition Act 2015) which states imprisonment ranging from 12 to 20 years. She urged that this law be enforced at all levels to protect women and children who are the most vulnerable. Speaking to Nigerians about the topic, INFORMATION NIGERIA gathered their opinion on the enforcement of the law on rape. Here are the reactions:

Reacting to the call made the wife of the President on our platform, John Paco admitted that since the law is already in place, more should be done in the area of the enforcement in order to protect all. He however added that “let them do something fast to protect men also from rape”. Although men’s rape cases are not often reported in the media, they actually do happen. The reason the media does not get wind of the news is because the victims are too embarrassed to talk about it. The very few cases that are usually heard of are those that after they’d become successful come out to tell their stories. When men who fall victim are sure they’ll get justice, it will definitely improve their confidence in reporting their predicament to the right authority. This will in turn deter the perpetrators from engaging in the criminal act.

Mfam Reagan emphasized the dire need to ensure that this law is enforced to the letter. In his comment, he said even if the punishment was death and it’s not being enforced, men will still engage in it because they know they will get away with it. A law is no law without enforcement. Chukwudumebi Diabuah said all levels of government in Nigerian needs to make a priority to enforce this law because the rate at which rape cases are being reported is alarming and something needs to be done very fast.

Though Wasiu Ibrahim opined that he is 100% against rape, he also said that women should be cautioned from dressing indecently. He said rape can be stopped if only women would dress decently. He explained further that he understands perfectly that rape is bad and needs to be stopped as soon as possible, but indecent dressing by women is just as bad and it needs to be regulated. He said men face a lot of temptations and constantly seeing this temptation would reduce their resistance.

Reacting to Wasiu’s take on the issue, Benedina Gbemi Jumbo said that “if you tell ladies to stop indecent dressing it’s like you are depriving them of their rights. Just leave them to express themselves and whatever they see they have to take it like that but to the rapists, they must face the full judgment. It is not until you expose your body that you get raped, how about those old fools raping 2, 3 years old girls? Do they expose their body too?