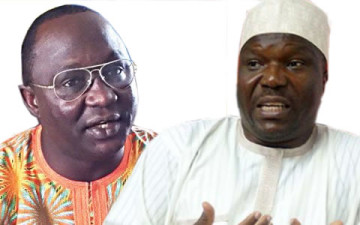 Organised labour in the country under the aegis of Nigeria Labour Congress and Trade Union Congress have jointly called for capital punishment for anybody found guilty of corruption in the country.

The President of the NLC, Mr. Ayuba Wabba, and his counterpart in the TUC, Mr. Bobboi Kaigama, made the call on Tuesday at a joint press conference on a national rally against corruption.

The rally is scheduled for Thursday (tomorrow).

The union leaders said they would lead workers in a solidarity march to the office of the Economic and Financial Crimes Commission, the National Assembly complex and the Office of the Secretary to the Government of the Federation to declare support for President Muhammadu Buhari’s anti-corruption campaign.

Wabba said, “He who goes to equity must go with clean hand. Part of the attributes of good governance is that we must have a minimum standard of transparency and accountability.

“If capital punishment was introduced and worked elsewhere to eliminate corruption, then we are for it.

If it worked in China, we must be ambitious enough to move beyond our lamentation to arrive at our destination.

“The organised labour is in support of capital punishment to eradicate or at least reduce the scourge of corruption.

“In the twilight of the last administration, there were allegations by no less a person than the former Governor of the CBN, Sanusi Lamido that billions of dollars was unaccounted for by the Nigerian National Petroleum Corporation; this led to his eventual suspension from office as CBN governor.

“The Nigerian Extractive Industry Transparency Initiative indicated losses due to crude oil swaps to subsidy and domestic crude allocations from 2005 to 2012, showing that USD$11.63bn had been paid to the NNPC, but that there was no evidence of the money being remitted to the Federation Account. NEITI also discovered that another USD$11.6bn was missing from Nigeria’s Liquefied Natural Gas company dividend payment”.

The NLC president, however, called on the Federal Government to ensure that all looted funds were recovered and that all those who stole the nation’s resources are prosecuted.

In his address, Kaigama called for the establishment of special courts to try corruption cases.

He said that the call for the establishment of the special courts became necessary in view of the fact that those who looted the treasury had taken advantage of the lapses in the judicial system to scuttle their trial.

He also called for the abolition of the joint accounts between the states and the local government areas, stressing that the accounts were a cover for the perpetration of massive fraud.

The TUC president said, “We strongly feel that it is better now than ever to address the issue of governance and corruption. Over the last 20 years, we have never experienced a situation where Nigerian workers would go home without salaries for eight months. What is responsible for this is corruption, bad leadership; not putting the right persons in places.

“We call for the establishment of special anti-corruption courts to try suspects since those who looted our treasury are now adept at exploiting the holes in the legal system to delay cases. The National Assembly should give us enabling law to fight corruption; also it should be compulsory for all public office holders to declare their assets”.

The TUC boss also enjoined anti-corruption agencies to “extend their search to states and local governments”, arguing that the level of impunity at the local governments and states “is more vicious”.

“Government should also abolish the joint account between states and local government areas because they used to commit a lot of fraud at these levels,” he added.