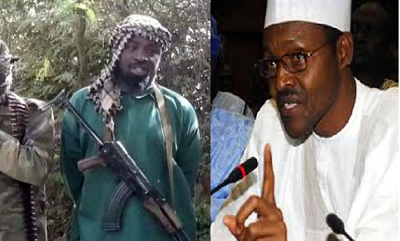 Some prominent groups and leaders in the North have advised the President Muhammadu Buhari-led Federal Government to proceed with caution in granting Boko Haram’s request for the release of its bomb maker, who is in detention, in exchange for the abducted Chibok schoolgirls.

The groups and leaders, who backed President Buhari on his offer to grant members of the insurgent group amnesty if they released the Chibok girls, however, kicked against the swap offer.

The President had on Tuesday announced that the Federal Government was still trying to identify the genuine leadership of the terrorist sect, so that a channel for negotiation may be opened.

Buhari, who was responding to questions from members of the Nigerian community in France under the aegis of the Nigerians in Diaspora Organisation, during his visit to the country, stated that he was worried by the Chibok girls’ continued stay in captivity.

He disclosed that the sect had offered to swap the girls for its Improvised Explosives Devices expert, who is in the government’s custody.

Reacting to the president’s statement, the Deputy Chairman of the Northern Elders’ Forum, Dr. Paul Unongo, lauded the negotiation move, saying every war does not end on the battlefield.

He, however, kicked against swapping them for the bomb maker in government custody.

He said, “The first issue is, yes, there is negotiation. The second issue is that Boko Haram insurgents have said they will bring back the Chibok girls if we release their bomb maker that has taken the lives of hundreds of Nigerians.

“I think as much as we desire that the girls be released, for the government to release a person that has the capacity to produce something that can take the lives of thousands of Nigerians, we are a bit worried.

“The dilemma is, we want the Chibok girls to be released and Boko Haram is driving a major negotiating strategy. It seems they (insurgents) have got our balls and they are squeezing the balls, saying ‘if we don’t do it, we will squeeze it more’.

Unongo, however, said the Federal Government’s recent onslaught on the sect would give the government an upper hand on the negotiation table.

He said the government could also request that the girls be released before Boko Haram’s demands were met.

“While we are negotiating, we should intensify the battle and make it so uncomfortable for the insurgents that the possibility of them being allowed to speak first is removed.

“I think I will rather use that strategy than release a bomb maker who has killed thousands of Nigerians. The man who can make a bomb and with his capacity (to cause destruction), I don’t think we should let him off the hook so easily”, he added.

In the same vein, Chairman of the rival Northern Elders’ Council, Tanko Yakasai, said dialogue was the only solution to the insurgency.

He also said President Buhari had yet to agree to the swap offer made by Boko Haram and expressed his reservation with releasing the bomb maker in exchange for the girls.

Yakasai said, “The President himself did not say he was going to do that. If he is going to release the expert in bomb making, what guarantee has he that when that man is released he will not go and make more bombs that would kill more people?”