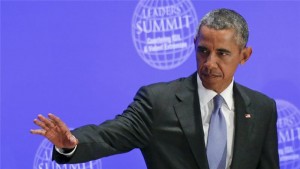 US President Barack Obama has urged members of a US-led coalition to hold course in its fight against the Islamic State of Iraq and the Levant (ISIL) against a backdrop of growing Russian military deployments to bolster Syrian President Bashar al-Assad’s government.

Obama said the US-led coalition had grown to 60 nations with the addition of new members Nigeria, Tunisia and Malaysia and had beaten back ISIL from a third of the terrain it once controlled in Iraq.

“We’ve seen that ISIL can be defeated on the battlefield where there is sound organisation and a government and military that is coordinating with this coalition and with our diplomatic efforts,” Obama told leaders at a summit of an anti-ISIL coalition. “It will require diligence, focus and sustained effort by all of us.”

ISIL fighters are being beaten in northeast Syria and have been repelled from almost all of the Turkey-Syrian border across which thousands of foreign fighters have travelled from overseas to swell its ranks, Obama said at UN headquarters. “Like terrorists and tyrants throughout history ISIL will eventually lose because it has nothing to offer but suffering and death,” Obam

a said. “Those who are labouring under their control, it is a stark and brutal life that does not appeal to people in the long term.”