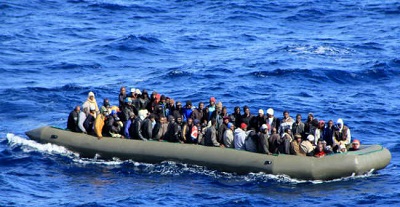 Former President Olusegun Obasanjo on Monday expressed sadness at African youths’ desperation to get to Europe by all means, even at huge risk to their lives.
Obasanjo also berated the European nations and their leaders for not doing anything to help the migrants that had reached the continent.
The former president in a statement he issued in Abeokuta, Ogun State, urged the international community to rise up and find solution to the growing wave of African children leaving their continent for Europe to meet “uncertain future”.
The statement reads in part: “it is a matter of considerable sadness for me when I witness the current wave of desperate youths risking their lives to travel to Europe and the futile efforts of the European countries to deal with those who have already set sail or have even reached shores of the European continent.
“Sometime in September 2000, the ex-Libyan leader, Col. Muammar Ghaddafi, called me and brought to my attention, the presence in Libya of thousands of Nigerian illegal immigrants attempting to make their way to Europe.
“These illegal immigrants almost entirely consisting of young men and women, who were prevented from using the facilities of Libya to sail to Europe, had constituted themselves into a menace.
“Some of them were involved in crimes and anti-social activities such as credit card fraud, burglary, drug trafficking and even violent crimes such as armed robbery.
“There was tension between the illegal immigrants and local Libyan communities resulting in the immigrants often being subjected to violent attacks.
“I agreed with Ghaddafi on the need to take immediate action to repatriate the immigrants to Nigeria. In this regard, I instructed the National Security Adviser to raise a team of officials from the security agencies to proceed to Libya to document all the illegal immigrants from Nigeria.
“I also approved funds for an aircraft to be chartered to evacuate them to Nigeria. The team worked assiduously over a period of two months with the cooperation of their Libyan colleagues.
“They travelled all over Libya and brought out to safety and provided protection to Nigerians who were in hiding for fear of attacks from local Libyan gangs. A camp was provided by the Libyan authorities where the illegal immigrants were accommodated, provided with basic necessities and documented.
“I also spoke to other West African leaders whose citizens had found their way to Libya and encouraged them to accept responsibility for the repatriation of their citizens back from Libya.
“Those who lacked the capacity to effect the repatriation were assisted by Libya and Nigeria-Libya by providing additional aircraft and Nigeria by accepting the return to Nigeria of citizens of ECOWAS countries, who I then arranged to be transported to their countries from Lagos”.