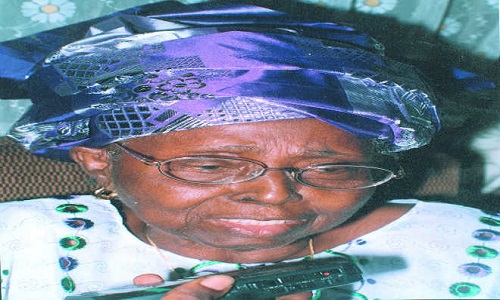 Former President Olusegun Obasanjo has urged the Awolowo family to celebrate, rather than mourn their late matriarch’s death.

Obasanjo, who arrived the Ikenne residence of the Awolowos at exactly 7.30pm on Saturday, said Chief (Mrs) Hannah Idowu Dideolu Awolowo lived an enviable life and should be celebrated in death.

He said, “It is a passage of an icon. Normally for all of us it should be a mixed feeling because Mama had lived a life that most of us, will envy, but it doesn’t matter how long our loved ones had lived, we will still want them to remain with us.

“We must thank God because Mama had lived through the vicissitudes of life, but she had died in peace. For her, it was a peaceful exit into the great beyond.

“Since Mama had decided to leave before her centenary celebration, we cannot query God”.

In a related development, the Senate President, Dr. Bukola Saraki, said with the death of HID Awolowo, Nigeria has lost a preeminent mother.

Saraki stated that even as a nonagenarian, the Yeye Oodua kept on hosting different fora and contributing ideas on the unity of the Yoruba people in particular and Nigeria in general.

He said, “I have been enthusiastically looking forward to making a big but surprise visit to Ikenne, Ogun State to be part of the centenary birthday celebration of Mama H.I. D. Awolowo, knowing that she is the last woman standing among the wives and mothers who truly contributed by supporting their spouses in laying the foundation for our nation building.

“She was an epitome of a good wife and mother and I have no doubt that as she reunites with her darling Husband, Pa Obafemi Awolowo, she would have good account to give of how far she had held forte in the absence of the late sage”.

The matriarch of the Awolowo family died in her sleep on Saturday morning at the ripe old age of 99.