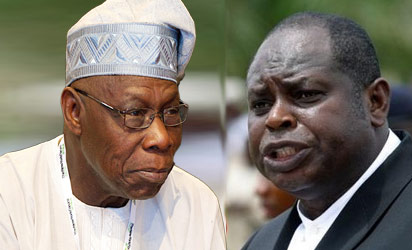 Former Bayelsa State Governor, Diepreye Solomon Peter Alamieyeseigha says he has forgiven everyone who plotted against him leading to his impeachment in 2005 and subsequent imprisonment. He said ex-president Olusegun Obasanjo has not known peace because of the role he played in events leading to his ordeal. This he said showed in the ex-president’s reaction when they met sometimes ago.

Alamieyeseigha was impeached and removed from office in December 2005 and was subsequently sent to jail for alleged mismanagement of Bayelsa State funds. Some of his property alleged to have been secured with stolen funds in and outside Nigeria were confiscated and given to Bayelsa State by the Economic and Financial Crimes Commission (EFCC) working in conjunction with foreign security agencies.

According to him, when Obasanjo met him accidentally at the Katsina Airport for the first time after his release from prison, he nearly fainted. However, he said: “I have forgiven all those who plotted against me, including former President Obasanjo. I know all those who plotted against me and sent me to jail. I cannot be living in the past as it does not help me in any way.

“What I passed through is painful all right but it would not have happened if it was not permitted by God. It is even more important to me that I am still alive today because I passed through many shadows of the valleys of death and still came out of them. ‘’I have met Obasanjo at very close quarters twice since I came out of prison,” Alamieyeseigha told Vanguard.

“I did not know that he was at the VIP Lounge at the Katsina Airport to attend the marriage of the late President Umaru Musa Yar’Adua’s daughter. Obasanjo came face to face with me at the airport when I went to use one of the rest rooms. It happened that as I opened the door to ease myself, I saw Obasanjo sitting face to face with me and he almost passed out.

“But I held his hands. He was scared and he felt uneasy all through. Then he began to ask ‘DSP, DSP, DSP! What have I done to deserve shaking your hands?’ There were many people there, one of them was Kenny Martins, the then chairman of the Police Equipment Fund.

“I told Obasanjo ‘I was only shaking you for two reasons: one-because of the fear of the Almighty God, who created us and two, for the fact that I am the Ganuma Katsina and you are a visitor to my emirate and tradition demands that I should welcome visitors’. That prompted Kenny to get up also and greet me, saying ‘great leader, great leader’ and he came and hugged me.

The former Bayelsa governor, who was granted state pardon by his former deputy governor and immediate past President, Dr Goodluck Jonathan said further: “The second encounter with Obasanjo was when we met on a flight going to Dubai. When Obasanjo came, I was already seated in the Business Class and he had no choice but to greet me.

“But because of possible fear of seeing me, Obasanjo called out ‘Fayose, Fayose, Fayose.’ I protested to him that I am not Fayose and I said: ‘Former President Olusegun Matthew Okikiola Aremu Obasanjo, you are a devil incarnate.’ I warned him not to talk again or he would face my anger. And I tell you, throughout the flight he could not say anything to me.

“The only thing Obasanjo managed to say was to ask me whether I was the only one who had ever been sent to the prison. ‘DSP, is it only you that entered prison? Don’t you remember that I was also imprisoned? You entered prison and I also did.”

Alamieyeseigha, however, described Obasanjo as a leader, who keeps his word and works hard. “But one thing I know about Obasanjo is that he is a leader. If Obasanjo gives you his word, it remains his bond. You can call him any time of the night, and he will pick his phone directly.

“He is ready to sit with you on how to solve a problem but he would not allow you to talk. That is the type of character he is. I have a dossier on Obasanjo and I will expose him and Nigerians will read it in my memoir,” Alamieyeseigha said.