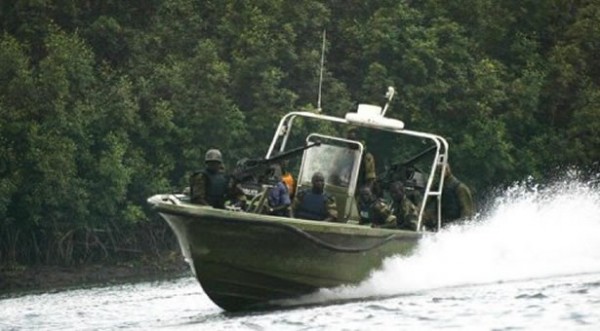 The Eastern Naval Command (ENC) of the Nigerian Navy on Friday said it had arrested 30 ships in the last nine months.
Rear Adm. Henry Babalola, out-gone Flag Officer Commanding (FOC) the ENC, disclosed this in Calabar during a handing over ceremony to his successor, Rear Adm. Atiku Abdulkadir.
“In the last nine months, we have arrested a total of 30 ships which include tug boats, Cotonou boats, and we have as well arrested a good number of oil thieves”, he said.
Babalola said that the ships were arrested under his leadership of the Command, adding that they were arrested for conveying adulterated crude oil and other stolen products on the waterways.
“It is to the glory of the command that during my watch as FOC, we had gallant officers who had the passion to ensure that crude oil theft and maritime crimes are reduced.
“The Command under my watch had also destroyed several illegal refineries on a daily basis. We get the information, we proceed on patrol, we arrest and destroy them”, he said.
Babalola said the destruction was done in line with the Nigerian Navy’s mandate, which was to clampdown on crude oil theft and illegal refineries.
He said that the damage which illegal refined product does to car engines, generators and boats was unquantifiable.
“When we arrest a ship, we go further to investigate its patrons and hand them over to the relevant government agencies, such as the Nigeria Security and Civil Defence Corps, for prosecution.
“We also maintain a steady patrol on our maritime domain to ensure that we secure the nation’s economic assets and other multi-million dollar offshore investments and platforms”, he said.
Babalola charged men of the Navy to desist from treating members of the public as ‘bloody civilians’.
He said that the era of military brutality was gone, adding that the civil populace had the right of expression on any issue of public interest.
“Nigeria as a country went through several military rule for many years, but with the present democratic system, I think we are back to normalcy and Nigerians deserve their fundamental human rights.
“Throughout my stay as FOC in the ENC, we never had any case of litigation or complain of military brutality”, he said.
Babalola said that he received two navy ships ‘NNS Okpabana’ and ‘NNS Centenary’ during his leadership in the command.
He said that the ships were donated to the ENC to boost their fight against crude oil theft and other maritime crimes.
Responding, the new FOC, Rear Adm. Atiku Abdulkadir, who was the Chief Staff Officer (CSO) of the Command, commended Babalola for his achievements at the command.
Abdulkadir who solicited the cooperation of personnel in the command, promised to fight crude oil thieves and other maritime crimes.
Babalola has been transferred to the Naval Headquarters, Abuja as Chief of Training and Operations. (NAN)