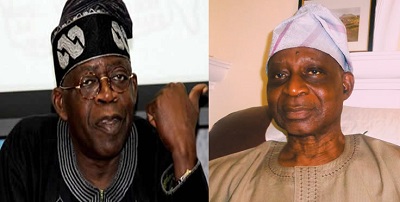 The Afenifere Renewal Group has condemned the Chairman of the now defunct Presidential Advisory Committee on National Conference, Senator Femi Okurounmu, for his criticism of the national leader of the All Progressives Congress, Asiwaju Bola Tinubu.

Okurounmu had blamed the ex-Lagos State governor for supporting President Muhammadu Buhari to win the Presidency, saying the latter tricked Tinubu into getting power back to the North using the APC.

“The keys to the chains of slavery we (Yoruba) thought we could use to break free were given back to the North by the APC. The APC became an agent of oppression and enslavement. We can all see that Buhari only tricked Tinubu to get power back to the North”, he was quoted as saying.

But in an interview with SUNDAY PUNCH, the ARG’s spokesperson, Mr. Kunle Famoriyo, described as worrying, the urge to heap the blame for the present administration’s problems on Tinubu.

Famoriyo noted that if there is indeed any blame to be apportioned, there is enough to go round all the politicians that were involved in the formation of the APC.

“Whenever things go bad, it is Tinubu’s name they call”, the ARG’s National Publicity Secretary said. “In fact, if a man’s wife divorces him, it is Tinubu’s fault. Is Tinubu a wizard? What led to the consolidation of the APC is more than the trivialization that Sen. Okurounmu is trying to imply. Tinubu was not the only one involved in the merger; it cut across the nation. Tinubu is a team player such that those involved agree with him on issues. Is that enough reason to castigate him?”

Mr. Famoriyo pointed out that “Tinubu is not an ARG member, but we know that God used him to carry out the change we are witnessing today. Some people are simply jealous and most of their reactions are out of jealousy. We must do away with the ‘Pull Them Down Syndrome’ that makes a Yoruba man denigrate his brother whenever something doesn’t favour him.

“Sen. Okurounmu’s statement is in the genre of analogue, incompatible with present-day politics. What we should be asking ourselves now is: After four or eight years of Buhari, then what? Whatever gains we make would be reduced to nothing if Nigeria is not restructured. We already have a road map in the 2014 confab report. This is the big challenge for the APC government now, if the goodwill they enjoy now must be sustained”.