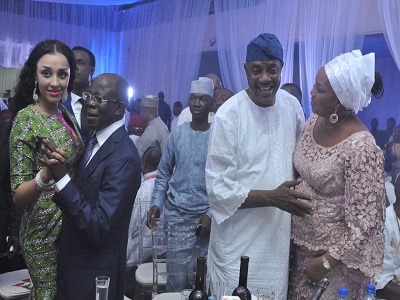 Governor Adams Oshiomhole of Edo State has pledged the sum of N200m for the renovation of the Ogida Police barracks in Egor Local Government Area of the state.

Speaking on Friday night at a reception organized to honour the Inspector General of Police, Solomon Arase, who hails from the state, Oshiomhole said the N200m token was to lead by example in asking the Federal Government to renovate police barracks across the country.

Announcing the N200m donation towards the renovation of Ogida barracks, the governor said the country needed to support President Mohammadu Buhari’s moves against corruption.

According to Oshiomhole, the president was laying foundation to strengthen institutions in the country so that people can rise to positions of authority based on merit and not ethnic bias.

He said that Arase displayed professionalism during the last general elections, though he was appointment by former President Goodluck Jonathan.

His words, “The IG has the will to rebuild the Nigeria Police in a way that Nigerians will be proud. The Nigeria Police is the most misunderstood institution. My happiness is that men and women in uniform can now do their jobs without fear or favour”.

On his part, IGP Arase promised to leave a landmark that is unprecedented in the history of the Nigerian Police.

The police boss, however, called on well-to do individuals to support the state government by providing vehicles and any other means that would help to check criminal activities.

He also vowed to continue to deal and harass cultists in the state including political appointees.

“Developmental partners cannot come without security all of you who have interest should not engage in things that will disrupt investment in the state. The Commissioner of Police has been given a clear directive on what to do”.

A two-time governor of Midwest and Bendel State, Dr Samuel Ogbemudia, said Edo should be grateful to have produced an IGP, describing Arase as an asset to the state.

“We thank God. We don’t need to go too far to find out what type of policeman is Solomon, the very first name Solomon invoke a lot from the memory, those who have read the Bible can testify that the wisdom of Solomon is beyond the appreciation of the ordinary person, and we have no reason to believe that God who sent you to this world will abandon you mid -stream”, Ogbemudia said.