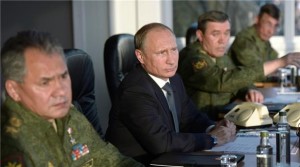 Russian President Vladimir Putin has warned that any attempts to overthrow the government in Syria could lead to a failed state like Iraq or Libya. Putin’s comments on Sunday come as the world’s leaders meet at the United Nations General Assembly in New York . Read more from Aljazeera:

Speaking on the US network CBS, Putin said that “Syrians and only Syrians” should be able to decide the fate of their country. “There’s no other solution to the Syrian crisis other than strengthening the effective government structures and rendering them help in fighting terrorism, but at the same time urging them to engage in positive dialogue with the rational opposition and conduct reform,” Putin said.

Asked whether the Syrian President Bashar al-Assad should be forced to go first, Putin said: “It’s only the Syrian people who are entitled to decide who should govern their country, and how.”

Al Jazeera’s James Bays, reporting from the UN, said there was no consensus between Western countries and Russia on how to proceed with the Syrian conflict and “there’s certainly a debate on which enemy to fight first”. Bays said EU and US leaders were also divided on what role Assad, a close ally of Putin, would play after any future settlement.