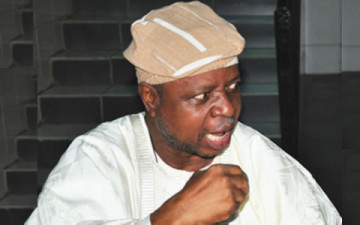 A member of the Peoples Democratic Party’s Board of Trustees, Chief Ebenezer Babatope, has said that the opposition party will hang President Muhammadu Buhari’s portrait in offices at its national secretariat also known as Wadata Plaza, in Abuja.

The former Transport Minister was reacting to the observation that the PDP did not hang the president’s portrait on the wall in any of its offices as was the case in the past when the party conspicuously hanged portraits of former presidents of the country elected on its platform.

Speaking in a telephone interview on Wednesday, Babatope said President Buhari’s portrait ought to be hanged on the wall at the opposition party’s headquarters although the PDP leadership was trying to make a point by doing otherwise.

“The President represents Nigeria. He does not represent the narrow and parochial interest of the All Progressives Congress. He represents the larger interest of the people. The PDP may be making some points and I think Nigerians should hear them out before crucifying the party.

“The PDP will hang President Buhari’s portrait. Nigerians have spoken through the ballot. They’ve shown their preference for Buhari and we have accepted their verdict. We shouldn’t really have any problems with the portrait of Buhari. The APC should not try to mislead Nigeria”, he explained.

X-raying the anti-corruption crusade of the APC-led Federal Government, Babatope explained that the various ongoing probes in the country would end up as a futile exercise because it was a creation of the elite to distract the president.

He said, “Our revered sage, the late Chief Obafemi Awolowo, said that probes will never solve the problems of any nation. Those who engage in probes will soon discover the futility of their actions. The probe exercise is a contraption by the elite to distract Buhari”.

Buhari Has Done Well Whether People Like It Or Not – Umahi