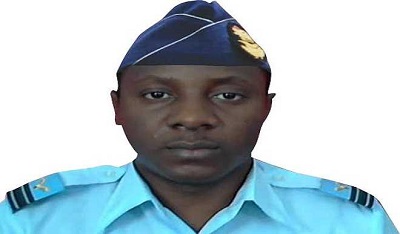 The Nigeria Air Force on Friday laid Squadron Leader Adekunle Suara, the pilot of the ill-fated Dornier-228, which crashed in Kaduna on August 29th 2015, to rest.
The remains of the late NAF pilot were interred in military tradition during a solemn burial ceremony, after a Christian church service at the National Military Cemetery in Abuja.
Highlights of the ceremony included the marching-in body of the fallen hero, reading of his resume, lowering of the casket, wreath laying, firing of volley by the burial party and sounding the last post.
The Chief of Defence Staff, General Gabriel Olonisakin represented by Air Vice Marshal Umar Omeiza, in a condolence message to Suara’s family, called for sober reflection and lauded the late squadron leader for paying the ultimate price in the service of his father land.
Also speaking, the Chief of Air Staff, Air Marshal Sadique Abubakar, described the deceased as a gallant and dedicated officer, whose death is a great loss to the Air Force family.
It would be recalled that the Nigerian Air Force (NAF) Dornier-228 aircraft, with call sign NAF030, crashed into a house at Ribadu Cantonment, Kaduna, ten minutes after take-off from the NAF base, Mando, killing all seven on board.
No casualty was recorded on ground.