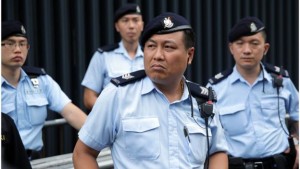 Nineteen thousand suspects have been arrested in a drive against organised-crime in China, state media said. A three-month operation led to the arrests in Hong Kong, Macau and Guangdong province. Police said triad gangs were increasingly expanding into mainland China. The crimes involved include drug dealing, gambling and prostitution. Triads are transnational crime groups, often based in Hong Kong, Macau and Taiwan, but operating globally.

“The message we want to send out to the public is that police have zero tolerance for organised crimes and any other illegal activities,” Au Chin-chau, chief superintendent of Hong Kong police’s Organised Crime and Triad Bureau told journalists. Illegal loans were also found to be a new source of income for the gangs, he said. Reports said 4,343 people, 1,177 of them from mainland China, were arrested by police in Hong Kong, where more than 7,500 properties were searched.

In Hong Kong, police seized $102m Hong Kong dollars ($13m; £8.5m) in cash, along with drugs, pirated DVDs, weapons and contraband cigarettes worth HK$67m. In neighbouring Guangdong province, more than 11,000 suspects were arrested. And in Macau, almost 4,000 people were picked up by police.