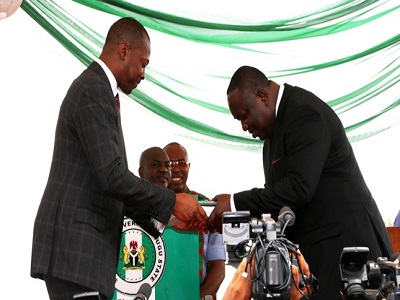 The All Progressives Congress in Enugu State has asked the state governor, Ifeanyi Ugwuanyi, to probe his predecessor, Sullivan Chime
Chime is reportedly one of the ex-governors currently being investigated by both the Economic and Financial Crimes Commission and the Independent Corrupt Practices and Other Related Offences Commission, following petitions against him.
In one of the petitions, a former National Auditor of the Peoples Democratic Party, Chief Ray Nnaji, who also went to court to compel the EFCC to investigate Chime, accused him of misappropriation, forgery and criminal conversion of public property, during his tenure in office between 2007 and 2015.
Already, some of Chime’s closest associates, including his former Chief of Staff, Mrs. Ifeoma Nwobodo, and a former Managing Director of the Enugu State Housing Development Corporation, Chief Ifeanyi Asogwa, have been interrogated by the EFCC.
However, the Enugu APC, which was giving its assessment of Ugwuanyi’s first 100 days in office, said he ought to have probed his successor.
The party’s publicity secretary, Mrs. Kate Ofor, urged Ugwuanyi to join President Muhammadu Buhari in fighting corruption by probing Chime’s administration.
She also urged Ugwuanyi not to overlook the corruption allegations against Chime just because he (Chime) endorsed him as his successor.
“He (Ugwuanyi) has turned a blind eye to the anomalies of the past government, premised on the obnoxious impression that he (Chime) put him into power.
“Today, the only electronic medium for community broadcasting, the Enugu State Broadcasting Service, has been leased to an individual who jettisoned the entire indigenous workers in the place and runs the system according to his whims and caprices.
“Immediate past governor Sullivan Chime sold virtually every piece of space in Enugu State. The Enugu International Conference Center, which could have been a beehive of activities, has been sold by Chime. It is expected that Ugwuanyi should join the anti-corruption crusade of the Federal Government and correct the abnormalities of the past government”, she said.
Ofor pointed out that Ugwuanyi’s administration was yet to take off and faulted a series of ‘thank you’ visits the governor paid Chime during the period.
According to the APC, “The government of Governor Ifeanyi Ugwuanyi is not yet organised. The governor spent the first half of his 100 days in office paying homage to his predecessor whom he believed put him in power. This is against the principle of democracy, which is about the electorate voting their choice into power.
“Although 100 days is not sufficient to assess the success or failure of any government, it is long enough for people to understand the man who is at the head of the government.
“The body language of the governor has not indicated readiness to move the state forward”.
Ofor said Ugwuanyi should move beyond road construction and address youth unemployment and challenges in the education system.