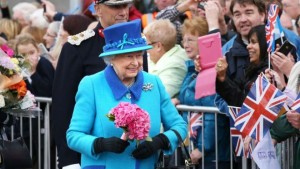 Cheering crowds have greeted the Queen in Edinburgh on the day she becomes Britain’s longest reigning monarch.

Bad weather delayed her arrival at Waverley Station, but the 89-year-old monarch and the Duke of Edinburgh later set off on the new Borders Railway.

David Cameron said the service she had given was “truly humbling”.

Dressed in turquoise with her trusty black handbag at her side, the Queen smiled and waved to those gathered at the station on the day she passes the record set by her great-great-grandmother Queen Victoria.