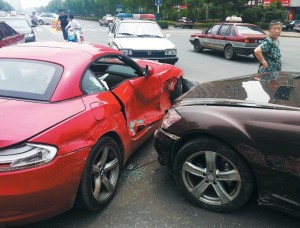 A father and son who were angry with each other, took their fight onto the streets of China, according to a video uploaded to the Internet.  The drama unfolded in Beijing, when the father and son, who had been fighting in their home, got into their luxury cars and drove away.

According to Scoop, the father was driving a black Mercedes Benz and his son was driving a red BMW. The father slammed on his breaks at this intersection, while his son, who was behind him, attempted to pass him.

That is when the father reversed and hit his son’s car. The two then began crashing into each other.

Other cars drove around the father and son.

After a few minutes, the son had enough. He got out of his car and ran away on foot. His father attempted to catch him, but he was unable to do so.  The incident was recorded on video, which was uploaded to the Internet, where it went viral.