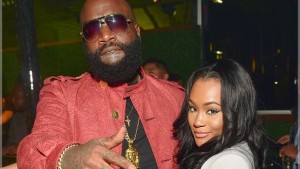 New reports has it that Mayback Music rapper, Rick Ross is planning to walk down the aisle very soon.

On Thursday night [September 17], Rozay reportedly got engaged to his longtime girlfriend Lira Mercer, aka Lira Galore as she goes by in the social media world.

The model announced the big news via her Snapchat Thursday night by posting a photo of her massive engagement ring with the captions: “YES! When it’s real, you just know.”

Her good friend Amber Rose later confirmed the news by congratulating the happy couple on her Instagram with the following caption, “Congrats to my girl @lira_galore and @richforever. Love is a beautiful thing.”

Although its been alleged that Lira Galore has been linked in the past with Drake, Diddy and even Justin Bieber, her tweet back in 2012, proves all she’s ever wanted was the bawse to be her one and only husband.