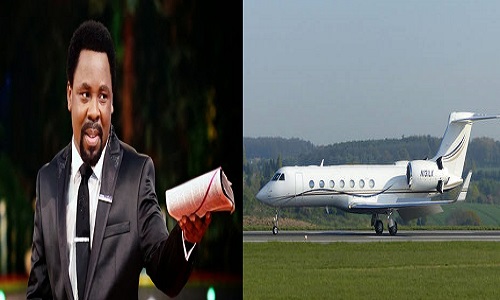 A representative of Prophet T.B Joshua has denied rumors making the rounds that the founder of Synagogue Church of All Nations recently acquired a $60 million private jet.
Ownership of private jets by big-time Nigerian pastors such as Prophet Joshua is not news but what made tongues wag in the SCOAN founder’s case is his renowned austere lifestyle, which many of his critics pointed out, was contradicted by his purported purchase of a multi-million dollar aircraft, whose maintenance could gulp as much as $3 million annually, depending on how frequently it is put to use.
Although regarded as one of Africa’s wealthiest pastors, T.B Joshua’s jet according to reports, was paid for by at least eight African Heads of State in 2014.
Denying the controversial clergy’s ownership of the luxury aircraft – a brand new Gulfstream G550 – a media aide, simply identified as Ezekiel, described the report as baseless rumor and enjoined the public to disregard the tale as there is no iota of truth in it.
The aide, who spoke to some reporters recently, slammed the purveyors of the report for peddling unnecessary rumors about Prophet Temitope Balogun Joshua.
Source: The NATION