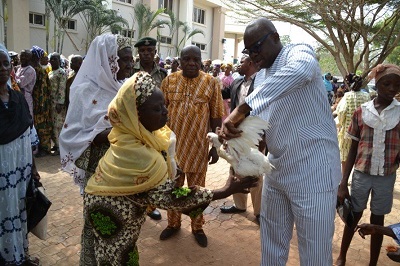 The battle line has been drawn between the League of Imams and Alfas in Ekiti and the state Governor, Mr. Ayodele Fayose as the former has ordered Muslims in the state not to collect rams and other food items for Sallah celebration, if presented to them in any form by the government.
The league reached the decision at a meeting held on Tuesday at Ansar-u-deen Society Central Mosque Odo – Otu, Ado Ekiti, where it reviewed the “deliberate marginalisation of Muslims in Ekiti State government political appointment”.
The Nigerian Supreme Council for Islamic Affairs and National Council of Muslim Youth Organisation, Ekiti State, had previously issued statements condemning Governor Ayodele Fayose for sidelining Muslims in appointments.
The All Progressives Congress in Ekiti in a statement by its Publicity Secretary, Taiwo Olatunbosun, had also described “Fayose’s treatment of Muslims in terms of appointment in the state” as “the worst since the state was created”.
The party, which accused Fayose of hypocrisy for criticizing President Muhammadu Buhari’s appointments, claimed Ekiti muslims were not given up to one percent of the appointments made by the PDP administration in the state.
In a communique issued at the end of the meeting, the league said, “Based on the above, the League, Ekiti State Council hereby resolve that: No Muslim in the State should collect rams and other food items if presented to them in any form by the government”.
The communique was signed by the state’s Assistant Secretary, League of Imams and Alfas, Alhaji Quadri Oguntuase; a Representative of Ansar-u-deen Missioner, Fatai Jimoh and Chief Imam, Ilogbo, Imam Abdul Rasak.