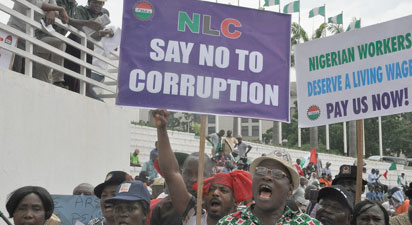 Senior lawyers in the country have hailed Nigerian workers and the Civil Society for holding a rally in support of the Federal Government’s ongoing anti-corruption crusade.

They, however, differed in the call for capital punishment for convicted looters of the public treasury.
Chief Ladi Williams (SAN), who hailed the action of the workers, said the Nigeria Labour Congress has the right to make the demands for death sentence for all corrupt public officials, but regretted that “our statute does not have provision for capital punishment”.

“The demand is therefore inconsistent with our constitution. Until the law is amended, I don’t think a judge has the power to pass death sentence on anybody.

“The demand is what I call the Chinese option. In spite of this, I agree that something drastic needs to be done about the state of corruption in the country.

“Some people have been known to reach out to adjudicators to compromise them. On several occasions, the accused are either freed or given a slap in the hand.

“It is a murderous cruelty for any of these people to get away with even a dollar from what they have stolen”, he said.

Mr. Williams added: “They are also right in kicking against the use of perpetual injunction by corrupt officials to restrain anti-corruption agencies from prosecuting them. But I will say that due process must be followed.

“I am also of the opinion that perpetual injunction should not be allowed in our fight against corruption. I find it difficult for anybody to prevent investigation of corrupt officials and something has to be done about it.

“If we don’t do anything about corruption, we would remain in poverty perpetually”.

The Chairman of the Presidential Advisory Committee on war Against Corruption and constitutional lawyer, Prof. Itse Sagay (SAN), described the protest as a step in the right direction, but frowned at the call for death penalty.

“The demand for death penalty for corrupt officials is a bit extreme. I have always been guided by the fact that once a life is taken, it can’t be restored”, he said, adding: “I totally support the campaign against the use of restraining injunction by corrupt people to prevent being prosecuted. Any judge who issues that should be regarded as guilty of gross misconduct and his job put on the line”.

Sagay added “I am however against going to their houses to bring them out because it would amount to physical violence. It should be left in the hands of the Nigeria Judicial Council (NJC).

“Such a judge should be queried and dismissed from office for promoting corruption”.

In a separate interview, Enechi Onyia (SAN), said the protest was in order because it is geared towards curbing corruption in the country.

“The Federal Government should take all of that and decide what is good for the country. It is the fundamental right of any Nigerian to go to court for whatever he wants. It is the court that can decide whether to grant the request or not”, he said.

Also commending the NLC, a human rights activist, Barrister Fred Agbaje, asserted that the “right to fair hearing should not make the court to blindly accede to the request of one man against the interest of the country.

“I support the NLC on their protest against the use of perpetual injunction by corrupt officials to avoid prosecution. Judges should weigh the interest of the larger society and the need to curb corruption as enshrined in section 15 of the constitution.

“I also support the demand for capital punishment for corrupt officials, irrespective of what some governors are saying. I am not an apostle of death penalty, but if that is what will stop or reduce corruption, so be it”.