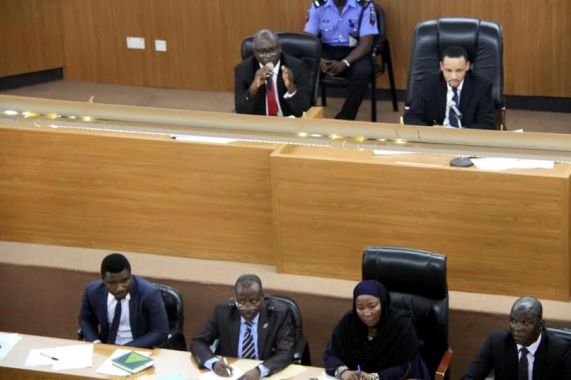 A former President of the Nigeria Bar Association, Chief Olisa Agbakoba (SAN), has faulted the Code of Conduct Tribunal for declaring itself at par with the Federal High Court.
The former NBA president was reacting to the issuance of a bench warrant for the arrest of Senate President Bukola Saraki by the CCT on Friday.
Represented by Mahmud Magaji (SAN) and another ex-NBA President Joseph Daudu (SAN), Saraki had raised objections to his trial by the tribunal citing the non-appointment of a substantive Justice Minister and Attorney General of the Federation (AGF) as well as a pending ruling of the Federal High Court, which had summoned both chairmen of the Code of Conduct Bureau, CCT and a Deputy Director in the Federal Ministry of Justice, Musiliu Hassan, who filed the case at the tribunal on behalf of the Federal Government.
In his ruling on Saraki’s objections, the presiding judge, Justice Danladi Umar, said that the tribunal took notice of the fact that there was no AGF at the moment.
He further held that the absence of the AGF does not stop the filing of a criminal charge adding that in the absence of the AGF, the Solicitor General can institute such charge.
On that ground, the tribunal knocked off the accused’s argument.
On the issue of a pending ruling, the tribunal held that the Federal High Court has the same jurisdiction with it, and hence, it was not binding by its ruling.
Justice Umar, therefore, gave the go-ahead for the trial to continue.
Reacting to the ruling, Mr. Agbakoba said the CCT was wrong to say that it was a court of equal jurisdiction with the Federal High Court.
“There are two kinds of courts in Nigeria, superior and inferior. All the superior courts are defined in Section 6 of the constitution; it does not include the Code of Conduct Bureau, it does not include the National Industrial court”, he said.
According to him, “The Code of Conduct Bureau is not a superior court; it is an inferior court and because it is an inferior court, it is amenable to the judicial review jurisdiction of a superior court of record like the Federal High Court”.
The Federal High Court, the former NBA president noted, is empowered by law to review the judicial work of the Code of Conduct Tribunal because it is an inferior court.
This same line of argument was supported by Ebun Adegboruwa, who described the Tribunal’s action as an assault on rule of law.
“What the Code of Conduct Tribunal did in spite of the order of the High Court amounts to judicial abuse of the due process of the rule of law and amounts to judicial rascality on the part of the serving judge of Code of Conduct Tribunal”.
Adegboruwa said the Tribunal was under the supervisory jurisdiction of the High Court, adding that the option left for the Tribunal was to approach the court that gave the order to either challenge it or vacate it.
He said, “It will amount to total anarchy for the parties affected by an order to decide whether or not to obey the order. So, to that extent, the bench warrant issued against the Senate President is ultra vires, it has no place in law and cannot be enforced, because if the order of the High Court to the tribunal was not enforced also the bench warrant of the tribunal to the Senate President cannot be enforced. You cannot use wrong to achieve a right”.