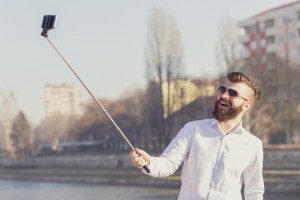 Mashable has gone through the numbers and it’s official: More people have died from trying to take selfies than from shark attacks this year. Last week, a 66-year-old Japanese tourist died and his companion injured when he fell down the stairs while attempting to take a selfie at the Taj Mahal. That brought the number of selfie-related deaths to 12, compared to 8 deaths caused by shark attacks in 2015, Mashable reports.

Most of the selfie-related deaths have to do with falling. The next leading cause has to do with injuries sustained by being hit or injured by a moving vehicle.

The problem isn’t the photos per se. Rather, it has to do with the fact that the people taking the selfies are focused on their phones and not their surroundings. Selfies don’t just put the photo-takers at risk: They can also cause harm to other people and animals. Earlier this month, hundreds of tourists descended upon a nesting ground for olive ridley turtles in Costa Rica. Local conservationists say the selfie-crazed crowd created such a distraction that many of the turtles returned to sea without laying their eggs.

Back in 2014, organizers of the Tour de France asked the public to “respect the riders” after a few accidents occurred when spectators ran onto the road to take selfies.  Selfies have become such an issue that the government of Russia has begun a “safe selfie” campaign. “Unfortunately we have noted recently that the number of accidents caused by lovers of self-photography is constantly increasing,” Yelena Alexeyeva, an aide to Russia’s interior minister, told Al Jazeera. “Since the beginning of the year we are talking about some hundred cases of injuries for sure. The problem really exists and leads to very unfortunate consequences.”