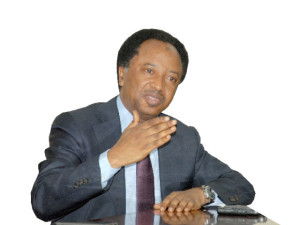 The senator representing Kaduna Central Senatorial District, Comrade Shehu Sani, on Friday publicly declared his assets, in line with the example laid by President Muhammadu Buhari and Vice President Yemi Osinbajo.
The senator, who was a civil rights activist before his foray into politics, said in a statement that he owns two residential houses in Kaduna, two houses under lease in Kaduna, two uncompleted office apartments in Kaduna, one residential house in Abuja, one family inherited house in Kurfi, Katsina State, and one family inherited house in Minna, Niger State.
Aside these landed properties, the senator said he owns several vehicles, and bought N5million worth of shares in 2007 but which crashed in 2008.
He said he authored over 30 books published in Nigeria, United States and United Kingdom with royalties and publishes a community journal ‘Peace Magazine’.
He also stated that he currently has a total of N22 million in three bank accounts.
The senator, who is married to two wives and has six children, said he decided to publicly declare his assets in line with the moral example set by the president and his deputy, both of whom publicly declared their assets on Thursday.
He said, “In line with moral example set by President Muhammadu Buhari and Vice President Osinbajo, and in conformity to the standard of transparent and exemplary leadership, and in submission to the public and popular demand for integrity test to all public office holders, in a new Nigeria on a filtration process for a politically cleaner and decent future, I have decided to voluntarily make this public declaration.
“President Muhammadu Buhari and Vice President Osinbajo public declaration of their assets is a moral challenge to all public holders. Their declaration challenges all men of conscience and docks all men who lay claim to self-dignity and self-worth.
“Their public declaration hangs a chain of guilt on the neck of all public office holders. To refuse to publicly declare assets is to continue to carry the burden of a moral thorn of guilt in a nation whose generation of leaders for so long stands in the dock of ethical court”.
The first time senator, however, said public declaration of assets does not make one a saint but that it avails the public the knowledge of his or her degree of sin.
He added that every public office holder carries with him a badge of suspicion and distrust until he proves his innocence or his degree of guilt.
“There are no saints and angels in politics, but the citizenry deserve to know the moral truth behind the facade of uprightness”, he said.
“A clean broom is needed to clean a dirty space. I chose to publicly declare and be pelted than to walk with the stain of suspicion and mistrust splashed on all public office holders by a generation of curious citizenry”.