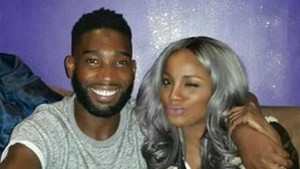 The singer was excited to meet Tinie Tempah as she gushed about him in the caption of her picture with him.

“Studio rats @tiniegram this is THE realest guy I’ve met in a long time AND he is Nigerian #greenwich #london #SeyiorshayThealbum Happy to have met u !!!” wrote Seyi Shay.

Tinie Tempah whose real names are Patrick Chukwuemeka Okogwu is one of the top rappers in England.

His management company Disturbing London manages Wizkid in the UK.

In June, Seyi Shay signed a recording deal with Island Universal Records based in the United Kingdom.

The signing took place in London at the Universal Offices in South Kesington on June 23, 2015.