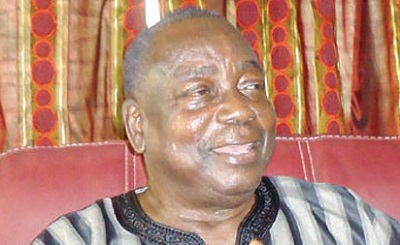 A two time former Governor of old Bendel State and a member of the Peoples Democratic Party (PDP) Board of Trustees, Dr Samuel Ogbemudia, said yesterday that Nigerians will not forgive President Muhammadu Buhari if he fails them.
He also cautioned Nigerians against criticising the president over his recent appointments.
The former governor described as unnecessary, attempts by some Nigerians to assess the Buhari administration in its 100 days in office, “when they knew that the man said he met everything in bad shape and in such situation you need to clean up the system so as to start on a good note”.
Ogbemudia bared his mind yesterday when he met members of the committee which he set up to oversee the yearly Award of the Best Journalist in Edo state, led by a former General Manager of the Edo State Broadcasting Service (EBS), Pastor (Mrs) Sibi Lawal-Igioh.
According to him, “Nigerians asked him (Buhari) to appoint people who can work with him and he can only appoint people he knows. If he fails by appointing a United Nation they will say it was his fault, they ought to have known. But he is now picking people he has tremendous trust in their ability. So those criticizing him should let him do his work. If at the end of four years he did not perform, then Nigerians have another opportunity to either say carry on or stop.
“All these criticisms, I do not buy them. And the people who are criticising him probably they have never held any government position, they don’t know what is happening there, that all that glitters is not gold”.
On the issue of one hundred days in office, Dr Ogbemudia noted that “First and foremost, Buhari was elected for four years and in the programme of events which led to the elections, at no time was hundred days mentioned. That they are being done in the past was perhaps a persuasive authority but that does not mean that everybody should keep to it. A programme well thought out to bring Nigeria back to the line of development, the line of security and so on, planning alone takes more than a hundred days.
“So I expect that when eventually he finished the home work he will come out with something big. When he was elected, Nigerians have very high expectation of his performance and in order not to disappoint Nigerians, he wants to take time to plan his programme so that when eventually he pushes it out they will welcome it.
“So they can excuse him because the Buhari they knew earlier on is no longer the same Buhari because this is a democracy. He has the National Assembly and the judicial arm now. His powers then is being shared with these two arms now. He cannot join the bandwagon, as a matter of fact that is why he wants to change the evil ways things are done before so that Nigeria will be better”.
Explaining the reason behind his decision to commence a yearly award for the best Journalist in Edo state, the elder statesman said, “when you go to Observer (state owned Newspaper), you see reporters who have worked hard over the years but no recognition. So what we want to do is that at the end of the year we will find out which journalist has excelled over the year and give him a plaque and a little money attached”.
“What we are going to do is open a fix deposit account so that the interest we make in the deposit can be used for the award even when I am gone. We have journalists who are working hard in this country and I feel we have to start from Edo state first to recognize them”, he added.