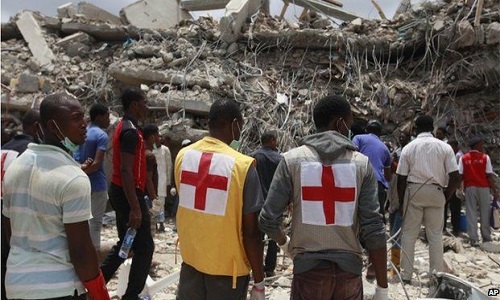 The Synagogue, Church of All Nations will tomorrow (Saturday) hold a memorial service for the victims of the September 12, 2014 guest house building collapse in the Ikotun, Lagos, premises of the church as part of activities commemorating the incident’s first year anniversary.

The church also said a service will hold in South Africa, the home nation of several victims of the building collapse.

A statement issued by the church on Friday said the founder of Synagogue, Snr. Prophet T.B. Joshua, will lead the memorial church service in Nigeria, while a delegation of the church is already in South Africa for the memorial service being planned for the ‘Martyrs of faith’.

It added that the entire Synagogue family across the world will join forces to pray for the repose of the victims’ souls.

It would be recalled that 116 people died when the two-storey guesthouse collapsed last year with over 100 others injured.

Prophet Joshua, whose church plays host to vast number of visitors from different parts of the world every other week, attributed the collapse to a small plane, which he said circled over the building four times before it eventually collapsed and that it may have been an attempt to kill him.

In July of this year, a coroner inquest instituted by the Lagos State Government into the cause of the collapse, said that the church’s “criminal negligence” led to the incident.

While delivering his ruling on July 8, the judge, Oyetade Komolafe, said‎ SCOAN should be investigated and prosecuted for failing to obtain the relevant approval before embarking on the construction of the building.