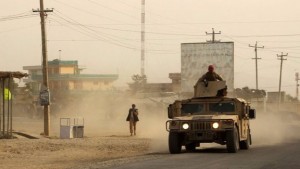 The Taliban say they have captured the provincial government headquarters in the northern Afghan city of Kunduz, and are advancing on the airport. BBC reports:

Hundreds of militants stormed the strategic city before dawn and quickly seized key buildings. The Taliban are also reported to have captured the city jail, freeing hundreds of prisoners. The government says it has sent reinforcements to Kunduz and fighting is still going on.

Witnesses report the Taliban flag has been raised in the city centre. If the city falls, it would be the first provincial capital to be taken by the Taliban since they lost power following the US-led invasion in 2001. Kunduz is strategically important as it acts as a transport hub for the north of the country. It also has symbolic significance for the Taliban as it was their former northern stronghold before their government was overthrown 14 years ago.

“With the capturing of the police compound and governor’s office in Kunduz, the whole province fell to our hands and our fighters are now advancing towards the airport,” Taliban spokesman, Zabihullah Mujahid said on his Twitter account. Earlier, the government admitted that it had lost control of parts of the city. It said at least 25 militants and two Afghan policemen had been killed and that reinforcements had been sent to the city.