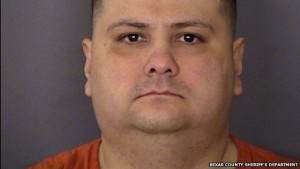 Video footage has emerged that appears to show police in Texas shooting and killing a man who had his hands up.

In the video, obtained by local media in San Antonio, Gilbert Flores is seen outside a house with his arms raised before shots are fired and he falls.

Police say he was armed and officers first attempted to subdue the 41-year-old with a stun gun.

A series of fatal police shootings in the last year have sparked protests and increased scrutiny on police tactics.

Bexar County District Attorney Nico LaHood said the video was “disturbing” but told people not to “rush to judgement” over what may have happened.

Meanwhile, US officials say a second video has emerged that gives a “very clear view” of a confrontation, the Associated Press reports. The officials declined to provide further details.