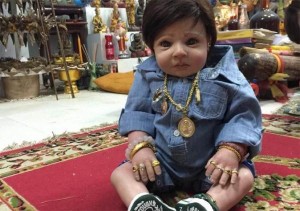 The Look Thep (Child God) dolls are believed to be inhabited by children’s spirits, created through special rituals. They’re considered to be an updated version of the ancient kuman thong, the practice of worshiping human fetuses that died in the womb. Look Thep allows people to revere the spirits of children without having to actually obtain dead fetuses.

No one in Bangkok is quite as obsessed with Look Thep as Thai doll collector Mae Ning. She’s the founder of the online Look Thep club and the brains behind the latest version of the dolls.

She started making them three years ago, as a way of dealing with her stubborn son. “I thought to myself, ‘how do I control him? How can I make him behave?’ So I was inspired to make a doll in his representation and created a soul for it,” she explained. “I put my son’s charms into the doll.

That’s how it started.” Mae Ning now makes thousands of dolls, each waiting to be adopted by a new mother or father. She modifies factory-made dolls by adding weight and styling their hair. Then she conducts a ritual, invoking the power of the Hindu goddess Parvati, to create new children’s souls to inhabit the dolls. All the dolls are then given names and she counts their age starting from the day they “came to life”.