A thief ‘died’ twice in hospital after being stabbed in the stomach by the owner of a house he had robbed. The thief, 38 year old Craig Norman, spent nearly six months in Manchester Royal Infirmary and is now facing the threat of being jailed. 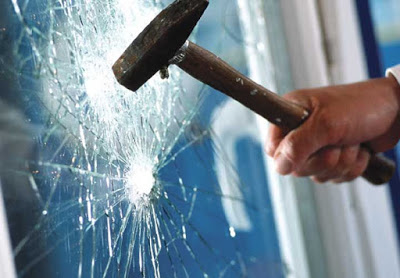 The courts heard how he used a spring-loaded punch to get into the home of 44 year old Lee Fellowes and his wife Kelly, 33.

Mr Fellowes went into the kitchen of their home after hearing the sound of smashing glass and when he looked towards the front door he saw a hand reaching for a bunch of keys in the lock, said prosecutor Subhanur Chowdhury. He kicked out at the hand but Norman managed to grab the keys and disappear.

“Bare-footed and in his pyjamas Mr Fellowes ran out of the back door. On the way he picked up a kitchen knife to protect himself and his young family,” said Mr Chowdhury.

Outside he saw a vehicle driving away at speed and thought the intruder was driving.
So Mr Fellowes went back into the house and that was when he saw his wife struggling with a masked man dressed all in black and armed with a hammer.

Mr Chowdhury added: “Mr Fellowes ran at the man. Instinct took over and he pushed his hand holding the knife into his midriff. He pulled the knife out of the man’s body and it fell to the ground.”

Despite his serious injury, Norman managed to escape and on reaching home was covered in blood, it was said.

In court, Maggie McCormack, who is Mr. Norman’s lawyer, said “Norman suffered a life endangering wound. And after being admitted to the MRI twice died. He does have a record but he takes issue with some of the evidence against him.”

Norman, she said, pleaded guilty to burglary and the theft of keys valued at £50. He was bailed and due to appear at the Crown Court for sentence on October 6.