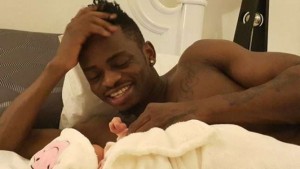 The Tanzanian singer is set to unveil the face of his baby daughter after concealing her identity since she was born.

Diamond will unveil her face publicly on September 20; interestingly, the unveiling will involve brands and several companies.

The Internet has reacted with many saying it is wrong for Diamond Platnumz to sell his daughter’s face to brands and companies.

During his brief stay in Nigeria Diamond Platnumz spoke about the recent drama concerning his daughter, and his ex wife Zari.
According to the brother of Zari’s ex, he claims he is the father of her new born daughter and not the singer.
Speaking to Hip TV, Diamond Platnumz spoke about the claims. “I want you guys to know this, first of all I don’t like talking about it because I know what they are trying to do is get attention from me. No one knows them and they want to get attention like ‘oh I was Diamond’s girlfriend’s ex’. So they want to get attention from me talking about them. It doesn’t make any sense” he said.

As regards to him being the father of Tiffah his daughter he said “I was in the labour (room) when she was coming out. I was helping them.“