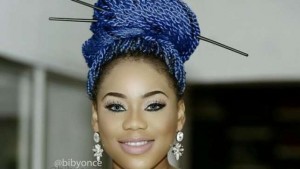 Famous Nigerian celebrity stylist, Toyin Lawani has opened up on how she battled with fibroids when she was pregnant with her last child.

Via her Instagram account she narrated her struggle with fibroids and how she nearly lost her womb.

“I choose to tell you my story today. I keep everything in my life under wraps because of the negativity out there. 90 percent of my life doesn’t make it 2d Internet. I’ve been through a lot in my life, but I’ll let you read all the truth in my book and watch on my reality show #Lifeofanenterpreneur…”

“When I had @lilatmfashionista (Tiannah) I bled all through d pregnancy not knowing. I was even pregnant till about 5 months. 3 years after I had her I was always having stomach pains and bleeding heavily through my periods went to see my gynecologist he said I had three small fibroids and we agreed to take them out through laparoscopic surgery.

“I woke up thinking it was done, he said it was on my womb, that I will lose my womb if he did it,and I didn’t sign for them to open me up, that they had to do it through major surgery, he said one was on my bladder, which made me pee myself when I cough in public and it gave me terrible back pains & leg pains, but he then advised me to have another baby before the surgery, years after I got pregnant wit @lordmaine1 despite d consequences around it, my partner insisted I had d baby after found out I was pregnant for months like this, because I was having periods, due to the fibroids, around five months i was bed ridden. I had a lot of pains from the pregnancy, flew to my gynecologist in UK. He said I had something called Red Degeneration,where the fibroids sucks d blood from d baby and doesn’t make it grow, same day found out I had Gestational Diabetics I thought i was going to lose the baby, they changed my diet, went through nonstop pains till about 7 months, later the baby started growing well and so was d 3 fibroids, they put my sugar levels on check, during this period.

“With all the pains I even had a fashion show in UK @afwlandafwn & no one knew what I was going through, even after the show I still ended up at d hospital, d next day & they couldn’t give me any serious meds all through my pains, because it could affect d baby, just pain killers, so I had 2 bare d pain & in all this, one day I was sleeping at home & some1 sent me a blog story, i read a lot of horrible things about the paternity of my child, with series of lies,just to pull me & my brand have worked so hard for. This worsen my health badly,but my partner & mother-in-law stood by me all through.

“Taking care of me & with prayers, they never doubted me for once. During this period I couldn’t walk, eat, bath myself, nor talk, thanks to my partner & brother. They used 2 bath me, also a sister God sent 2me, but d pain stopped about 7 months. A lot of my former staff had left me by then, but I raised a team of interns & worked till I was 8 months &2weeks because like everyone else,we have bills 2 pay. I even lost my home and formal shops. After I had d baby, I started working on my new site Tiannahsplacempire quietly…leaving some details out but u can read it in my book.

“Next day after my bday 2nd of March, I  was having fun with family at Federal Palace, I started bleeding chunks of blood nonstop. I was rushed to Reddington and collapsed when we got there. They stopped d bleeding & pleaded with me 2do d surgery, but i kept postponing it, because I didn’t want to lose my womb. It happened again, but this time i couldn’t fly out,a friend told me about a very good Lebanese hospital & they rushed me there. They took the 3 fibroids out & saved my womb. I was so scared of d scar from d surgery but 2 my surprise, it’s so thin it’s unbelievable, when I see pips with CS scars. I’m like hell no.

“Well i thank God for my life & my family for standing by me on my sick bed, and thanks to d wonderful doctors @celebdr Dr Diya you are wonderful man, Drwale, droke, DrValerie. They all made me feel at home, too many jokes from them & thanks to my online TeamTiannah &my 40member of staff at Tiannahsplacempire that, kept the Biz Going & ladies pls check urself regularly,imagine if i was too far from the hospital?

“This is how people bleed to death. Lord i thank you for your continuous blessing & that I can hold my kids again & have more of them……I’ll serve you forever.”