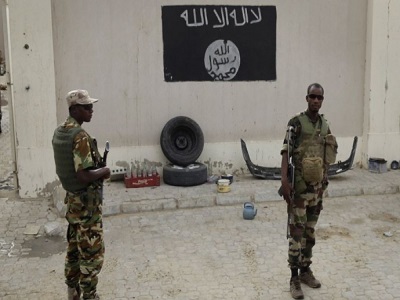 The Nigerian Army has hoisted the country’s flag in Gamboru Ngala, a border town with neighboring Cameroon, days after recapturing it from the Boko Haram sect.

The sect had used the town as a stronghold to launch attacks, including kidnappings and murder in both Nigeria and Cameroon.

The Chief of Army Staff, Major-General Tukur Yusuf Buratai was in the town Wednesday to boost the morale of troops on the frontlines of the fight against Boko Haram, a statement by the acting Director of Army Public Relations, Colonel Sani Kukasheka Usman, said.

“Today is very significant not only to the Nigerian military but also to the people of Nigeria and the peace loving people of the world because we are able to restore the territorial integrity of our dear country Nigeria, by hoisting the flag. First by capturing the town from the clutches of Boko Haram terrorists and now we have taken full control and hoisted our flag”.

Cameroonian citizens across the river also reacted happily to the hoisting of the flag.

“The inhabitants of the town across the river in Cameroon were so happy, they were cheering the chief of staff and members of his entourage”, the army spokesman noted.

Before it became the stronghold of the Boko Haram militants, Gamboru Ngala, was a bustling border town full of commercial economic activities as it served as a trade route where traders from Nigeria, Cameroon and the Central African Republic engaged in business activities.

However, years of violence by the insurgents forced residents to flee, turning the once lively town to a shadow of itself.

“Since the advent of the Boko Haram insurgency, they captured the town and killed most of the inhabitants of the town and some of them have either gone as refugees or become internally displaced persons within the country”, said Usman.

“Unfortunately, the level of destruction in Gamboru Ngala, by Boko Haram terrorists is unprecedented. Almost all the structures have been destroyed and you can’t even get a single soul. Remember this is a very big town that is very strategic and economically [viable] too”, he added.