Home News Feed Trouble In Assemblies Of God Church As Members Did This To Newly...
Facebook
Twitter
WhatsApp

There was trouble in the Assemblies of God Church, Mount Street, Agbani-Road in Enugu State yesterday, Sunday, September 11. 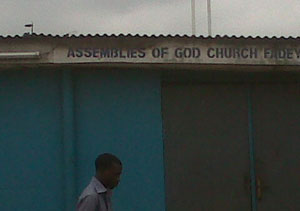 Vanguard reports that trouble started two months ago when a new pastor was transferred to the branch of the church. This, did not go down well with a faction of the church branch as they protested and engaged one another in a free-for-all following the alleged transfer of a new pastor to the church.

However, to ward off the impending clash, the worshipers were directed by the police in the state to hold separate services (according to their faction) outside the compound, till the issue will be solved. The church members paired themselves and consequently, divided the church compound into two, where the rival groups erected canopies for the church services while the main church auditorium was locked.

It however seemed that one of the groups got the chance to use the main church auditorium yesterday, for church service. This got members of the other faction angry since it was agreed that no one is eligible to use the auditorium till court delivers judgment on the matter. Talking to journalists, the pastor that was allegedly transferred out from the branch, Rev. Agbo, said trouble started on July 19, ”when one man in my church, who claims to be a lawyer, but is championing illegality and unlawfulness imported Nathan Udeze to come and overthrow me, so we resisted them that day.

“The matter went to police and from there to court; the police advised us to lock the church and we did; we started worshiping outside; they went to court for us to open the church for them; they have not allowed the court to decide the case. They came on last Monday and broke the entrance to our school; then today again, they came and broke the church entrance, contrary to the agreement we reached with the police that we will wait for the court to decide.”

On the claim that he had been transferred out of the church, he said: “I am still in charge of this place; I came here on April 12, 2013 and till date, I remain the senior pastor in charge of this church branch.”

Meanwhile, hell was let loose recently at the United Methodist Church, in the Oshodi area of Lagos when the church members chased out their pastor from the pulpit.  Also, a South African pastor, Pastor Peniel, is popularly known for a number of strange acts. He had fed his congregation live snake. He had turned human hair into food for the consumption of the church members.