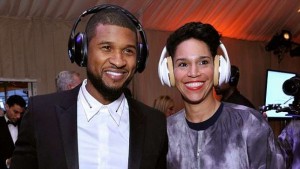 Veteran R&B singer, Usher has allegedly secretly tied the knot with his manager and fiance, Grace Miguel in a private ceremony.

Reports say that the pair’s secret wedding came to light after Miguel posted a picture of herself and Usher, who was wearing a gold wedding band.

The couple eloped earlier this month, and managed to keep the nuptials a secret for more than two weeks.

It’s not clear where the private wedding took place, but the newlyweds jetted off on a honeymoon to Cuba afterward, reports say.

The couple announced their engagement in January after dating for several years.

“I have an incredible partner and manager. She has helped me through some of the hardest times in my life and my career,”Usher praised Miguel in a Billboard cover story a year ago.“She’s someone who has been able to support and understand all of who I am. Not just as a dancer or as a performer or as a singer, but as a humanitarian and a businessman and as a person,” he added

Usher was previously married to reality star Tameka Foster, they have two children together, 7-year-old Usher Raymond and 6-year-old Naviyd.

They had a contentious divorce in 2009, and a highly-publicized custody battle in 2012 and the singer ultimately retained sole custody.