Home Politics Why Some Of Us Are Still Holding On To Our Official Vehicles...
Facebook
Twitter
WhatsApp 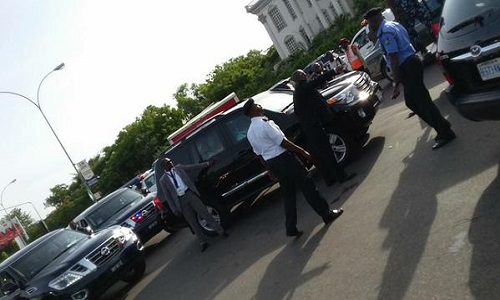 Over three months after leaving office, some ex-ministers in the last administration have not returned the official vehicles in their possession.

Such vehicles include pilot cars with which they get easy passage on the highway and cars attached to their families.

However, steps have been taken to recover the vehicles as the Federal Government has written some of the ex-ministers, 15 of them it was learnt, to that effect.

According to a report by The NATION, some of the former ministers claimed they had not returned their official vehicles because of outstanding salaries, claims and severance package.

The government is believed to have asked permanent secretaries in the ministries to write the former ministers.

If the ex-ministers fail to return the vehicles as directed, the federal government might be forced to apply sanctions on them.

A Presidency source said: “Some of the ex-ministers are yet to return their official vehicles, especially the Sport Utility Vehicles (SUVs), which they were using. It is amazing that some of them are still using pilot vehicles for passage.

“While some of them claimed they are still entitled to such perks for about three months after leaving office, a negligible few handed over their vehicles before May 29.

“Some of them said they had not fully disengaged because they had outstanding eight-month salaries, allowances, claims and severance package to collect from the government.

“We have about 15 of them who have not fully complied with the directive to hand over their official vehicles.

“The government has no choice but to write the affected ex-ministers. Or else, we may be forced to buy new vehicles for the incoming ministers”.

Responding to a question, the source said: “Some former ministers assumed that they were entitled to some of these vehicles because of the monetisation policy of the government.

“They said they were awaiting official clarification on the matter”.

Of particular interest among those said to have returned vehicles in their possession in compliance with the memo, is a former minister in the Ministry of Power, who reportedly returned 15 vehicles.

The source added: “The vehicles included some which were hijacked from the parastatals or agencies under the ministry”.

In justification of their decision to hold on to their official vehicles, a former minister in the last administration said: “They are talking of vehicles when some of us have not been paid for eight months.

Most of us have outstanding claims and legitimate allowances to collect.

“Do you know that most of us, including ex-President Jonathan and ex-Vice President Namadi Sambo have not been paid our severance package? We left this vital decision to the administration of President Muhammadu Buhari.

“Some former ministers went on annual leave abroad shortly after leaving office. Others were displaced and had been busy with relocation. But they are already returning these vehicles”.