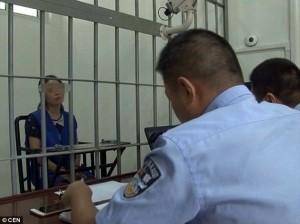 A Chinese woman who suffered a miscarriage has been arrested for allegedly stealing another mother’s child in order to conceal the truth of her loss from her family.  According to Scoop, the Suspect, who is known as Zhao Juan, dressed up as a nurse on August 23 and took a new-born boy to pass off as her own from a hospital in eastern China’s Hongze county.

She was apprehended by the police when she was faking childbirth in the same hospital on the same day.
Zhao suffered a miscarriage during the first three months of her pregnancy, which is reported to have been caused by her own carelessness.Heart-broken Ms Zhao decided to fake the rest of her pregnancy.

She did not wish to break the news to her family because she wanted to keep enjoying the extra love and care she had received when she was pregnant. When her due date drew nearer, Ms Zhao hatched a plan to fake childbirth.In the early hours of August 23, Ms Zhao went to the Hongze Chinese Hospital of Herbal Medicine and stole a nurse outfit.

She then snuck into the maternity ward and snatched a newborn son from a mother, who is known under the pseudonym of Wang Li.Afterwards, Ms Zhao is thought to conceal the baby in a large white handbag and left the hospital. When Ms Wang realised her son was missing, she and her family immediately called the police.
The police reviewed the security footage and narrowed down the suspicion on Ms Zhao who was seen entering the hospital in her own clothes but left in a nurse outfit with a bulging bag.