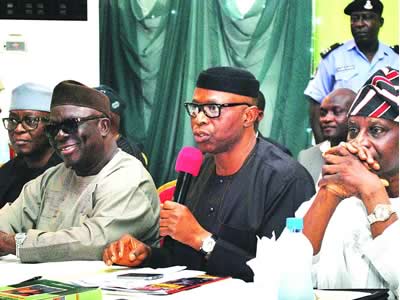 Governor Olusegun Mimiko of Ondo State has said that Yoruba land remained better protected by members of the Oodua Peoples’ Congress, OPC, than by the Nigeria police.
The governor stated this at the 80th birthday celebration of OPC founder, Dr. Frederick Fasehun, in Lagos on Saturday.
“You founded OPC. Today, I tell you in Yoruba land that many Yoruba people will feel secure with OPC guarding their streets than the conventional police”, he said.
According to Mimiko, the formation of the group was one of the many legacies of Mr. Fasehun.
“It is not yet over; you struggled for democracy for this country; the second part of it is indeed the struggle for restructuring Nigeria into true federal states.
“One thing is clear and I have always said this that OPC is about protection of Yoruba people, because Yoruba people hate injustice”, he said.
The Ondo governor described Mr. Fasehun as a gentleman, a detribalised and unique Nigerian.
“I speak on behalf of the government and people of Ondo state; we are proud of you. As a governor of Ondo state, I am proud to be associated with you”, he added.
In his remark, Major Hamza Al-Mustapha (retd.), the former Chief Security Officer, CSO, to a former Head of State, late Gen. Sani Abacha, said Mr. Fasehun was a bridge builder with a large heart.
“He has done quite a lot; nobody can quantify the much he has put across the country.
“He has the capacity and the wisdom and the large heart to build bridges of peace in Nigeria”, he said.
Al-Mustapha, who was released from prison last year following his discharge and acquittal in the assassination of Hajiya Kudirat Abiola, also described Mr. Fasehun as “brave, dependable, fearless and knowledgeable” person.
In his speech, the OPC leader said that the celebration was organised to build bridges by bringing different ethnic groups in Nigeria together.