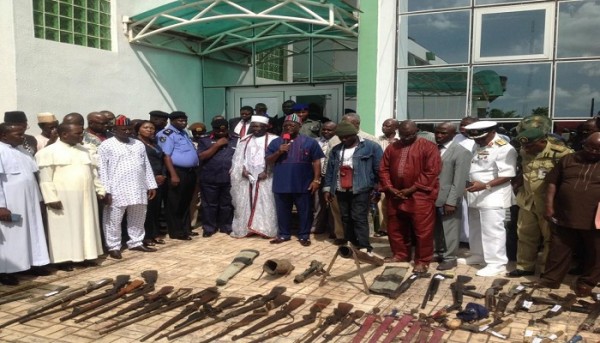 A total of 175 people, Friday, benefited from a sum of N17 million for embracing the Benue State Government amnesty programme by surrendering the illegal weapons in their possession.

Governor Samuel Ortom announced the release of the money for payment to those who surrendered their illegal weapons during his amnesty programme which closed September 30.

Ortom also held a meeting with 175 people who surrendered 366 assorted weapons at the Government House in Makurdi, saying that the amnesty committee has organised a retreat which would hold this week for those who responded to the programme.

Governor Ortom hailed those who responded to the programme, saying that they would be rehabilitated and integrated to live normal lives in their communities.

He further stated that his administration will partner with security agencies to fish out those still in possession of illegal weapons and perpetrating crimes in the state.

In their separate responses, leaders of armed gangs in the state who surrendered, Messers Terzungwe Shiando, Msugh Tyavyar and Terwase Agwaza popularly known as “Ghana”, expressed their appreciation for the opportunity to be reintegrated into the society.