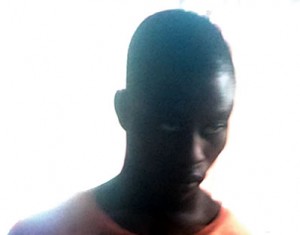 A 24-year-old painter, Ola Junaid, is battling for his life at the Lagos Island General Hospital after a teenager, Afeez Ibikunle, allegedly stabbed him in the neck with a broken bottle.  The suspect also reportedly stabbed Junaid in the armpit while he was trying to run to safety. He was said to have been rushed to a private medical centre in the area from where he was referred to the general hospital. PUNCH Metro learnt that Ibikunle was fighting with somebody on Ajayi Bembe Street, Lagos Island, on Tuesday, near a shop that Junaid was painting. Junaid was said to have separated them and warned that they stay away from where he was working.

It was gathered that Ibikunle, who reportedly felt offended by the painter’s reaction, went back to the scene of the fight about two hours later, confronted Junaid and stabbed him multiple times in the process. It was learnt that the suspect, a welder, fled the area, leaving the victim for dead in a pool of blood. He was, however, chased by some eyewitnesses who arrested him and handed him over to the police at the Adeniji-Adele division. An eyewitness, Idris Iyaniwura, who spoke with PUNCH Metro in Yoruba, said, “Everything happened very quickly. He (Ibikunle) attacked Ola (Junaid) where he was painting a shop. We thought he was only giving vent to his feelings until he suddenly started stabbing him. He fled but about five of us tracked him down and took him to the police station.”

Junaid’s brother, Owolabi, said the family had known no rest since the incident happened, adding that he had been responding to treatment. He said, “We have been running all over the place since Tuesday night. We initially took him to a private hospital. The bleeding was much.  We thank God his condition is gradually improving but he can’t talk yet. “He attempted to make peace between that boy and somebody he (Ibikunle) was fighting with and warned them not to disturb his work. He was still painting that shop when Ibikunle attacked him unawares. He stabbed him in the neck and forehead and while he was trying to run away, he pursued him and stabbed him in the armpit. So far, we have spent about N150,000 for his treatment.”

A police prosecutor, Sergeant A. Koti, on Thursday brought the suspect before a Tinubu Magistrates’ Court on one count of assault. The charge read, “That you, Afeez Ibikunle, at about 8pm, on October 27, 2015 on Ajayi Benbe Street in the Lagos Magisterial District, did stab one Ola Junaid with a broken bottle on his neck, armpit and forehead which caused him grievous harm and thereby committed an offence contrary to and punishable under Section 243 of the Criminal Law of Lagos State, Nigeria, 2011.”