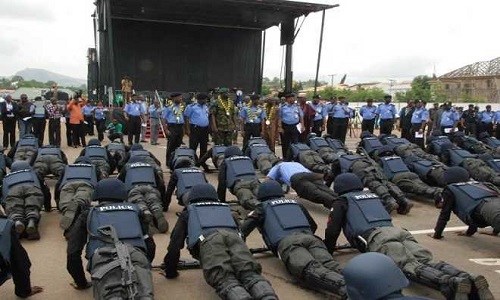 The Nigerian Police Force has announced the successful conversion of 196 regular police officers into Mobile Police Commanders to bolster the combat capabilities of the police officers cadre.
A statement Wednesday by the Force Public Relations Officer, Assistant Commissioner of Police (ACP) Olabisi Kolawole, said 196 police officers were trained in intensive combat operations.
The statement disclosed the mobile police commanders were also trained on ethics, personnel management, musketry, human rights, fire arms laws and regulations aimed at equipping them to become efficient Unit Commanders.
According to Kolawole, the Inspector General of Police (IGP), IGP Solomon Arase at the passing out ceremony of the Unit Commanders conversion course held at PMF Training College Ila Oragun, Osun State tasked the new Commanders to make supervision and total control of their policemen seriously.
She added that the IGP also mandated them to do away with illegal deployment of their men to unauthorized persons or beats, reiterating the need to be civil to members of the public in the course of carrying out their constitutional duties and ensuring zero tolerance for corruption.