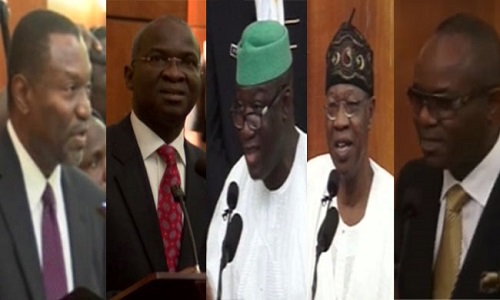 A member of the House of Representatives, Mr. Mark Gbilah, has described as “too much”, the appointment of 36 ministers in one fell swoop by an administration that needs to cut costs.

Speaking with journalists in Makurdi, the Benue State capital yesterday, Rep Gbilah said there was need to trim down the number of ministerial appointees at a time, so that the cost of governance could be reduced.

He said: “Our Constitution is rather ambiguous in the issue of Ministerial appointments. That provision says we require one Minister from each state of the federation in an administration, but it did not say it should be all at one time”.

“I could have staggered it. There is need to look into the possible amendment of that section of the constitution. What I mean is that the constitution would have made provision for staggered appointments in such a manner that some states would produce Ministers within a specified periods and others would also do likewise within another period. So that we do not have so many Ministers at one time.

“There is need to look into that constitutional provision, we are all clamouring for the reduction of expenditure and cutting down on the cost of governance, we must not be compelled to make provision for two Ministers in Ministries, we are totally against that.

“36 is even too much. They keep complaining of the National Assembly but you never stop to look at the retinue of staff of the Minister. The cost of the maintenance of the office of the Minister.

“The special accommodation, the official engagements and all the rest of it.  It’s quite capital intensive. So I do not believe in the present arrangement, in fact they are too much. That constitutional provisions needs to be looked into for possible amendment”.