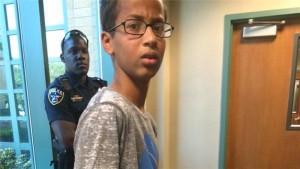 An American boy arrested for bringing a homemade clock to his Texas school, that was mistaken for a bomb, is moving to Qatar after accepting a scholarship offer to study there. The Fourteen-year-old’s family announced the move in a statement on Tuesday, a few hours after he was at the White House for an astronomy night hosted by President Barack Obama. The bespectacled ninth-grader became a global sensation after his September arrest, which many believe was influenced by bias against his Muslim religion.

Mohamed accepted an offer from the Qatar Foundation to study in its Young Innovators Programme. “This means, that we, as a family, will relocate to Qatar where Ahmed will receive a full scholarship for secondary and undergraduate education,” his family said in a statement.

Mohamed visited Doha earlier in the month and has been on a worldwide tour, visiting a number of foreign dignitaries, including Sudanese President Omar al-Bashir, according to Sudanese media. A statement released by the Qatar Foundation on Tuesday said the Young Innovators Programme “encourages recipients to follow their aspirations in education while fostering a culture of innovation and creativity”.