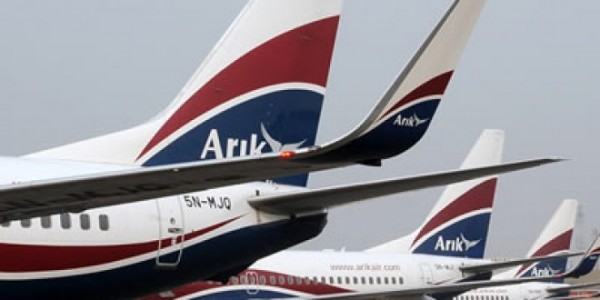 The Accident Investigation Bureau (AIB) said it had begun investigation of Tuesday’s wing-tip brush by two Boeing 737-800NG belonging to Arik Air at the Murtala Muhammed Airport in Lagos.

The AIB’s spokesperson, Mr Tunji Oketunbi disclosed this in an interview with the News Agency of Nigeria (NAN) on Wednesday in Lagos.

“Immediately the incident occurred, we deployed our investigators to the scene but I don’t have the outcome of their investigation yet”, Oketunbi said.

Adurogboye noted that the wing-tip brush by the aircraft was a minor incident, adding that the NCAA would however carry out investigations to unravel its cause and prevent future occurrence.

He said: “Once you have operations, there are bound to be incidents. It is not a serious issue. One aircraft parked, the other was trying to go out and their wings touched.

“Naturally, they are expected to stop the operation, check the planes before returning it to service. But we will do what we are expected to do by going there to inspect and re-certify the aircraft”.

We’d earlier reported that Arik Air had confirmed that the wing-tip of two of its aircraft brushed each other while one of the planes was marshaling out of the ramp for a scheduled flight at the General Aviation Terminal, GAT, of the Lagos Airport on Tuesday.

“Two of our aircraft, Boeing 737-800NG were this afternoon involved in a wing-tip brush at the General Aviation Terminal (GAT) of the Murtala Muhammed Airport, Ikeja, Lagos.

“One of the aircraft, 5N-MJP was marshalled out of the ramp for a scheduled flight when its wing brushed that of another aircraft, 5N-MJQ parked on the ramp.

“There were no incidences as the safety of passengers was not jeopardised. We have grounded the two aircraft and are looking into the incident”, a statement by Arik’s Communications Manager, Mr. Ola Adebanji, had said.