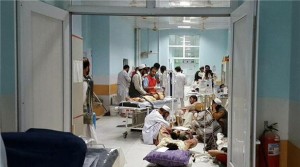 Doctors Without Borders (MSF) has said at least 16 people, including nine of its staff have been killed in an overnight bombing of a hospital in the embattled Afghan city of Kunduz. Among the fatalities in the early Saturday morning attack were three children. It also wounded 37 people, including 19 MSF staff, the medical charity told Al Jazeera. Aljazeera reports:

In a statement on Saturday, the office of President Ashraf Ghani said Army General John Campbell, head of the US-led forces in Afghanistan has apologised for the incident.  Officials of MSF earlier told Reuters that they “frantically phoned” NATO and Washington DC, as bombs rained on the hospital for “nearly an hour”.  Pentagon has also acknowledged launching the air strike “against individuals threatening the force”.

The MSF hospital is seen as a key medical lifeline in Kunduz, which has been running “beyond capacity” in recent days of fighting which saw the Taliban seize control of the provincial capital for several days.