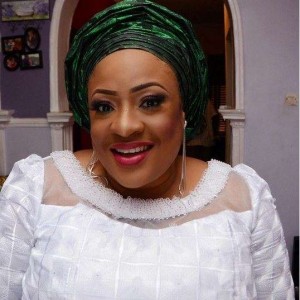 Veteran Yoruba Nollywood actress, Foluke Daramola-Salako has spoken about her large body size and how she is comfortable with it.

In a recent interview with The Sun newspapers she revealed that she might want to lose a pound or two, but she is okay just the way she is.

“One thing about me is that I have self-confidence. I don’t believe everybody has to be slim-shady. Even though, I don’t want to be slim shady, maybe I would want to lose a pound or two but I like myself just the way I am. I know if I am slim, I might not look good. I am cuter as a chubby person, so whatever anybody says doesn’t affect my self-confidence” she said.

“I don’t wish to be like Genevieve Nnaji or anybody else, I love the way I am and that’s the way I treat people’s opinion about me” she added.

Foluke Daramola is married to Kayode Salako, and according to her he loves the way she is. “My husband doesn’t like slim women. So, that boosts my ego” the actress said.