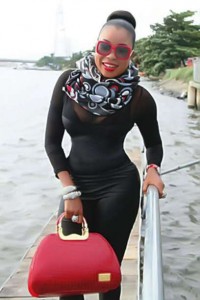 It seems like it has turned to a battle between Nollywood stars now.

Liz Anjorin is out to prove she’s financially stable after rumors hit that her shop at Ogba has not been closed due to the lack of funds.

Speaking further on her financial status, the actress said she spends millions on projects, and claimed she is living large in Ikoyi: she also boasted that she was the first Yoruba actress to have a home in Lekki.

“I think an enemy of progress is spreading this news. Anybody who doesn’t like me should go and hug a transformer. I just shot a soap recently; I also released a video. If I am broke, would I be spending millions on these projects?” said Liz Anjorin.

“I have never borrowed money from anybody. I am living large, I live at Ikoyi. I was the first Yoruba actress to have lived at Lekki Phase One (Lagos). I am the first to have a shop. On top of it all, I am a very pretty girl, I can never be poor. Even without me working, I can never be poor. I can only be broke if there is no God,” she further said.

In June the actress denied rumors that she had gotten married.