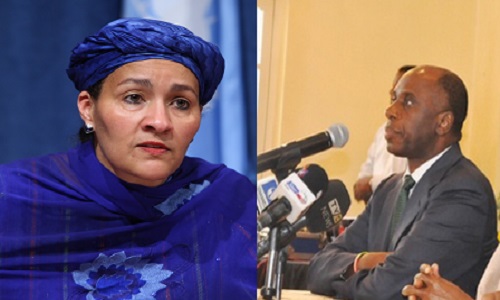 Two ministerial nominees, Amina Ibrahim and Rotimi Amaechi are right about now responding to petitions against their nominations before the senate committee on Ethics, Privileges and Public petitions.

Ibrahim and Amaechi are being grilled now ahead of Tuesday’s screening of the 21 ministerial nominees unveiled by Senate President Bukola Saraki last week.

Senator Danjuma La’ah from Kaduna state had petitioned the Senate leadership against Mrs. Ibrahim’s nomination to represent the state, insisting that there were more eminently qualified candidates to fill the state’s quota in the Federal Executive Council.

However, in her presentation to the committee on Monday, the ministerial nominee responded thus: “I am assuming that I will be representing Gombe state because I am not from Kaduna state. My father is from Gombe state and I was born in Gombe state. I was only educated in Kaduna state”.

Amaechi, a former governor of Rivers state is facing allegation of embezzlement of state funds when he was governor according to a petition brought against him by a senator from the state.

The senator is insisting that based on the outcome of the Justice George Omereji Judicial Commission of Inquiry, which indicted the former Rivers governor, he is unfit to be nominated as a minister from the state.

As at the time of publishing this report, Amaechi was waiting to take his turn to respond to the committee’s questions.